“I AM NOT LOOKING BACK

I WILL PRESS ON” 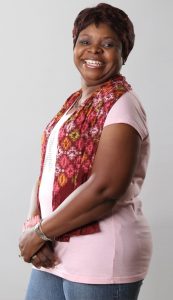 2009– I was diagnosed with Breast Cancer after a self- examination, doctor visit, second opinion, mammogram, ultrasound and biopsy. . in one breast. Within a very short period, the aggressive cancer had spread to the other breast.

‘Three months later, surgery was performed and I felt as if I was free of Stage 3 Cancer. Chemotherapy was not my best friend; it was truly very difficult for me and took a toll but I was not ready to give up because I came too far by faith. I endured the battled and wore on. Following chemotherapy, radiation followed.

Genetic testing, in 2010, resulted in my being advised, in 2013, that I was positive for the BRACA 1, which meant at some time in my life I would have gotten cancer, With all the hardships during chemotherapy, I am eternally grateful that my cancer emerged early in mid life.

2014 – I am still thanking God for daily strength and courage,

as I am cancer FREE.

He will take you there and back. I will press on until the end.