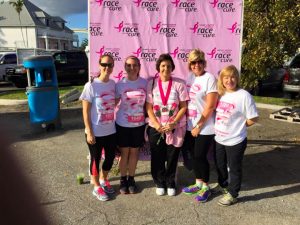 In 2015 Helen Pinder in center with flowers

Nassau, The Bahamas – It’s been just a little over two months since Helen Pinder, the matriarch of Pinder’s Customs Brokerage Ltd., lost her battle with breast cancer. Now, more than half of the staff at her company, along with their family members, will take part in a local cancer run this month in her memory – continuing a tradition she started five years ago.

“She was like the sun. She was the center and lit up everything,” said Shannon Pinder, as she reflected on the memory of her late mother-in-law.

She was originally diagnosed with an aggressive form of breast cancer in May 2013. It was already at stage 3C. She endured a double mastectomy, underwent chemotherapy and radiation. For four years she was in the clear. But, in July 2017, she was re-diagnosed with Stage 4 breast cancer. 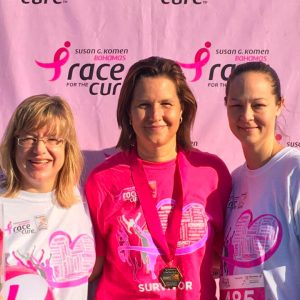 Since she was 16-years-old, Helen worked for the family business and eventually became one of the directors of the company. Her daughter-in-law said she enjoyed helping out wherever she could.

“She would walk into the office and everyone would try to say hello to her and she would do the same. She knew everyone by name and if she didn’t know your name, she would make sure to learn it immediately,” said Mrs. Pinder.

“When the company found out Helen had passed away, it was a different place. Every single person knew her. Most of our staff have been here from the beginning, 50 years now, so many of them have known her their whole lives. We are all like family.”

In fact, she said it was her mother-in-law’s vibrant personality and active lifestyle that caused the family to get involved with the Susan G. Komen Bahamas 5K Race for the Cure.

“My mother-in-law was the one who got us involved in any kind of support for anything cancer-related when she was diagnosed with breast cancer. She made sure everyone was signed up and that we all came,” she said. 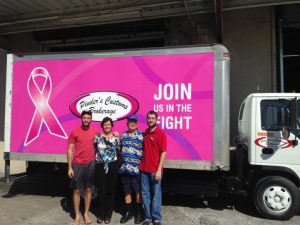 “The races became important to us because she was the driving force behind it. Our first walk with Susan G. Komen Bahamas was in 2014, right after she got diagnosed. She walked in the races and even when she didn’t feel good, she would still go. She was passionate about anything that was related to breast cancer. She got involved in the Cancer Society of The Bahamas and even got involved in support groups abroad where she received her treatment,” said Pinder.

On January 19, members of the Pinder’s Customs Brokerage family and staff will be participating in Komen Bahamas in Helen’s memory.

“We want to stay active like she did. It was important to her to exercise and find something to keep you active. She struggled with anxiety and depression after her diagnosis, so staying active really helped to keep her in good spirits.”

Pinder said out of 90 employees, around 50 persons from the company have signed up to participate in the 5K, including the spouses and children of staff members.

Mrs. Pinder said Helen led a very active lifestyle despite her diagnosis. One of the things she said her mother-in-law loved to do was take pictures. 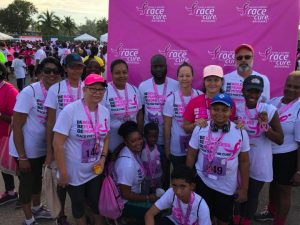 “She had to take a picture of everything. The family photos are probably in the thousands. A lot of times we would complain, but now we have so many memories to look back on because she took so many pictures. Helen just love nature and she enjoyed being outside. Her favorite sport was tennis. We all played tennis together, something she enjoyed doing with the family,” she said.

Mrs. Pinder encouraged families who have a loved one fighting breast cancer to do what Helen did and constantly capture moments together.

“Figure out a way you would like to look back and remember your times together. It doesn’t have to be a picture, but something that makes the moment special. Write down that memory or if there is something physical you can keep like a shell from the beach-someway to capture that memory,” she said.

Mrs. Pinder applauded the work that Susan G. Komen is doing as she strongly believes in the power of research.

“The most important thing to me is the research. There’s no point in any of this if we are not monetarily supporting scientists to research and learn how to treat and cure this cancer. The funds from the walk go back into the community for education purposes and for research. That’s of utmost importance,” she said.

Komen Bahamas provides an opportunity to raise awareness about cancer and its impact on thousands of women and men in The Bahamas.